I was born in St Pauls Community, Moa Island.  My Dad came from Poid at the back of Kubin Community, but his father came from Niue in the South Pacific.  My mother was a woman from Erub and her Dad came from Oveau in the New Hebrides.  St Pauls was settled predominately by South Pacific Islanders.  My dad came to St Pauls for a census of South Sea Islanders in the Torres Strait, my mother came because her family was here.

I had 7 brothers and sisters - our life was tough because we had to survive from day to day, no hot water.  We started having our baths in the creek.  We had no fridge or electricity, we fished everyday for food and grew food by the seasons, hauling water for the gardens.

I was 14 before I left, and we went to Thursday Island for the week. We went because I was in the choir.  My mum had to cut my hair because I hadn’t brushed it for ages. I thought TI was deadly, it had 4 or 5 cars and a couple of taxis, everybody used to walk.  It was my first time to see shops. I didn’t like icecream - it was too cold.

My mum used to weave, to maintain the houses which were made of woven coconut.  I learnt from watching , sitting next to her and copying. When we had sports at school we used to weave balls to play with. I had to make my own baskets when I started fishing. The baskets were for food and for bringing home the fish.  I am one of the only women left who knows how to make our traditional baskets.

I see turtle caught in the nets when I go out in the dinghy. These are big turtles, not little ones, they need to come up for air and when they are caught in the nets they drown. Before we never had nets now I see many drowned turtles, if this many turtles drown just in my patch of sea how many are drowning everywhere else? I’ve seen sharks tangled in nets underwater. The turtles are attracted to small fish that hang around the nets, when the turtles get caught and drown they are washed up onto dry reefs.

I would like to know why the nets are floating around our sea? Are they washed over from other ships or is it rough weather that makes the nets come loose? It is good that the things made from ghost nets are being exhibited. It will make people aware of what is happening in the oceans. 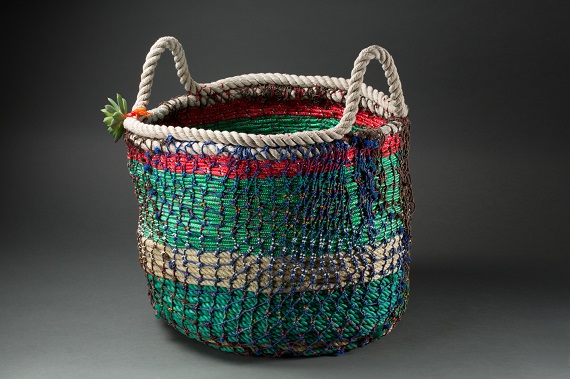