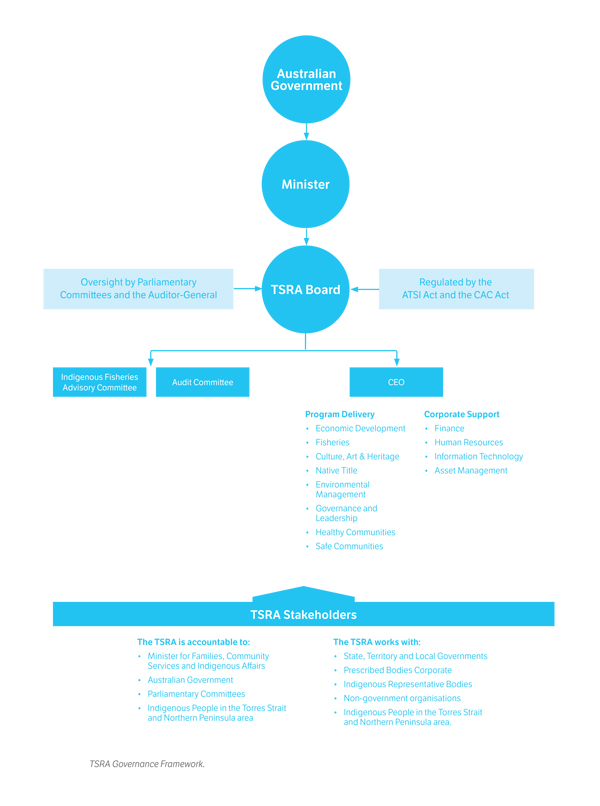 Click here to open the above diagram in another window.

The TSRA consists of an elected arm and an administrative arm. The elected arm is comprised of 20 elected representatives who are Torres Strait Islander and Aboriginal people living in the Torres Strait region. Up until 2012, seventeen TSRA Members were Torres Strait Island Regional Council (TSIRC) and Northern Peninsula Area Regional Council (NPARC) Councillors elected under the Local Government Act 1993 (Qld), while three TSRA Members were elected under Division 5 of the ATSI Act 2005 (for the TSC wards).

From 2012 separate TSRA Board elections are to be conducted by the Australian Electoral Commission. Twenty TSRA electoral wards have been created. The first TSRA election took place on 15 September 2012.

At the inaugural meeting of the TSRA Board, Members elect a Chairperson, a Deputy Chairperson and an Alternate Deputy Chairperson.  A Chief Executive Officer, who is a senior Australian Public Service officer
appointed by the Minister for Families, Community Services and Indigenous Affairs, is responsible for the TSRA’s administration and staffing.

The enabling legislation for the TSRA as stated in Section 142, Part 3A Division 1 of the ATSI Act 2005, is as follows:

(a) is a body corporate, with perpetual succession; and
(b) is to have a common seal; and
(c) may acquire, hold and dispose of real and personal property; and
(d) may sue and be sued in its corporate name.

(3) The common seal of the TSRA is to be kept in such custody as the TSRA directs and must not be used except as authorised by the TSRA.

(4) All courts, judges and persons acting judicially must:

(a) take judicial notice of the imprint of the common seal of the TSRA appearing on a document; and
(b) presume that the imprint was duly affixed.